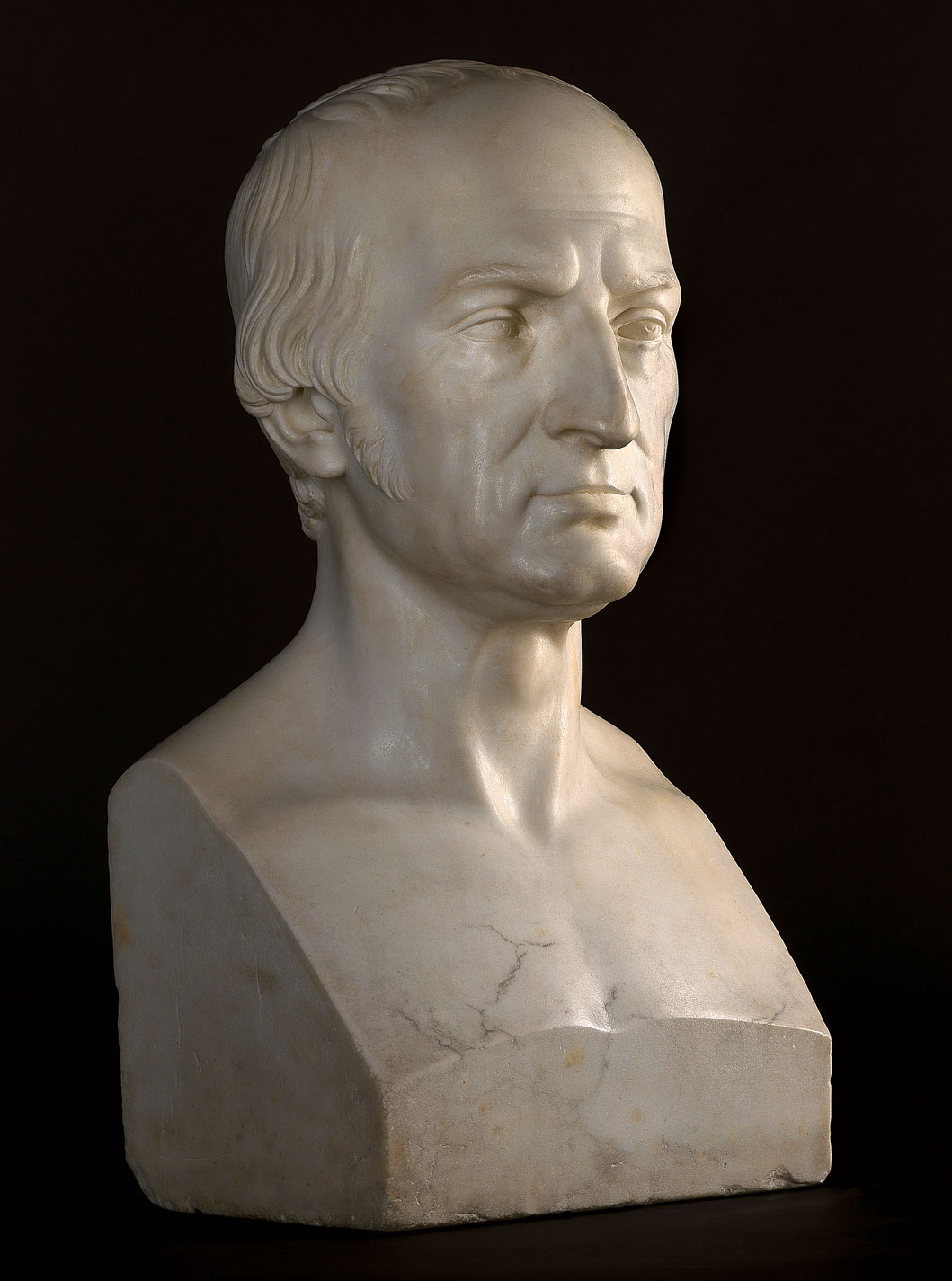 Dr. Samuel Hahnemann moved to Köthen in the year 1821 to treat his patient, Duke Ferdinand von Anhalt-Köthen. Protected and supported by the Duke, he was able to perform successful therapies and make efficicious medicines. The Duke may therefore have commissioned the bust because Hahnemann was appointed that same year to the position of personal physician in the small duchy.

Duke Friedrich was succeeded as ruler in 1830 by his brother, Heinrich von Anhalt-Köthen (1778-1847), who is also known to posterity for his support of homeopathy from its earliest beginnings. Hahnemann remained almost 14 years in Köthen with his large family, and it is here that many of his most important works were written, before he married a French patient of his in 1834 and moved with her to Paris, where he died in 1843.

Hahnemann was born a son of Christian Gottfried Hahnemann, the Meissen porcelain painter. In 1775, he began a medicine degree in Leipzig, graduating from Erlangen in 1779. In the years that followed, he practised as a physician, chemist, translator and writer in many cities in northern and central Germany. He also lived in Molschleben, Göttingen, Pyrmont (1794), Wolfenbüttel, Brunswick (1795) and Königslutter (1796-1799). He continued to publish avidly, particularly translations of chemical and pharmaceutical works, as well as works of his own.

Between 1780 and 1805, Samuel Hahnemann lived in more than 20 different places, almost all of them in Saxony-Anhalt, Saxony, Thüringia and Lower Saxony. He never provided any precise reasons for these frequent moves, although conflicts with the respective medical societies were sure to have played a key role, in that he insisted on producing his homeopathic medicines himself, despite the fact that such preparation of medicines was a privilege reserved for apothecaries at the time.

Hahnemann’s first wife died in Köthen in 1830; four of his daughters now assisted him in his large practice. The 1830s also saw bitter ideological struggles over the new teaching, which came to a head over the first homeopathic hospital in Leipzig, which was founded in 1833.
Hahnemann died in Paris, probably of pneumonia, on 2 July 1843. He was initially buried in Montmartre cemetery, but was later buried with his second wife in the Père Lachaise cemetery. As he wished, the epithet on his grave reads “Non inutilis vixi” – “I did not live in vain”.
In 1851, a monument to Hahnemann was unveiled in Leipzig during a congress of the Central Homeopathic Association. He is also honoured by the impressive Hahnemann memorial in Washington, DC, which was unveiled in 1900.

The sculptor who made this Hahnemann bust, Luigi Bienaimé, was born in Carrara in 1795, where he received his initial training as an artist at the local academy of fine arts. At the age of 22, he won the Rome scholarship, which allowed him to live in that city for a number of years.

Bienaimé quickly gained a foothold in Rome and began work there as a workshop assistant to one of the best-known sculptors of the time, Bertel Thorvaldsen; later, he was even appointed by the latter to manage the workshop. Another of his early works, a “John the Baptist” dating from 1820, is now in the Metropolitan Museum of Art in New York. A group of figures representing “Amor giving water to a dove” is kept in the Winter Palace in St. Petersburg.

When Thorvaldsen his teacher died in 1844, Bienaimé wound up his master’s business and opened his own, larger studio. Between 1855 and 1860, Bienaimé worked in Florence, where he mostly sculpted lyrical, idealised and religious figures. He died in Florence at a ripe age on 17 April 1878.

A remarkable aspect of this Hahnemann bust is that it is dated 1821, at which time the artist was a mere 26 years old and on a scholarship in Rome. It is not known where the sculptor and his model actually met. The bust shows strongly expressive features of Hahnemann, now aged 66, which also bear witness to the portraitee’s sensitivity and determination. 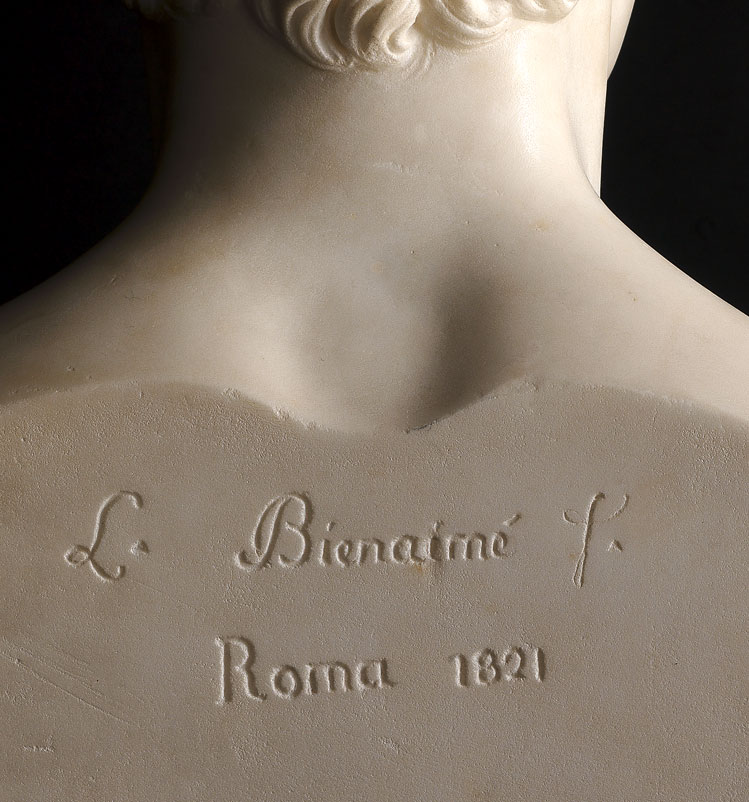 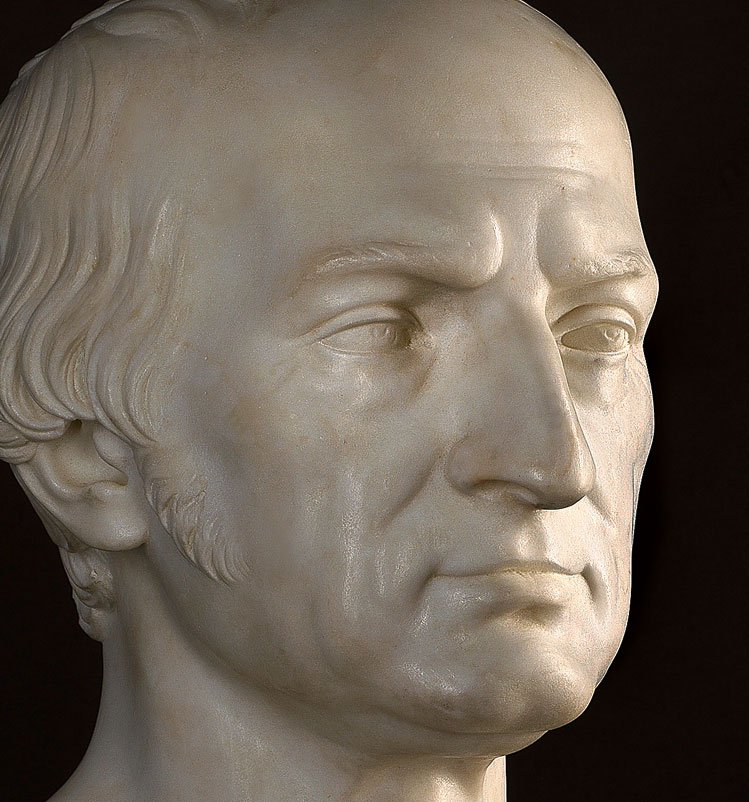