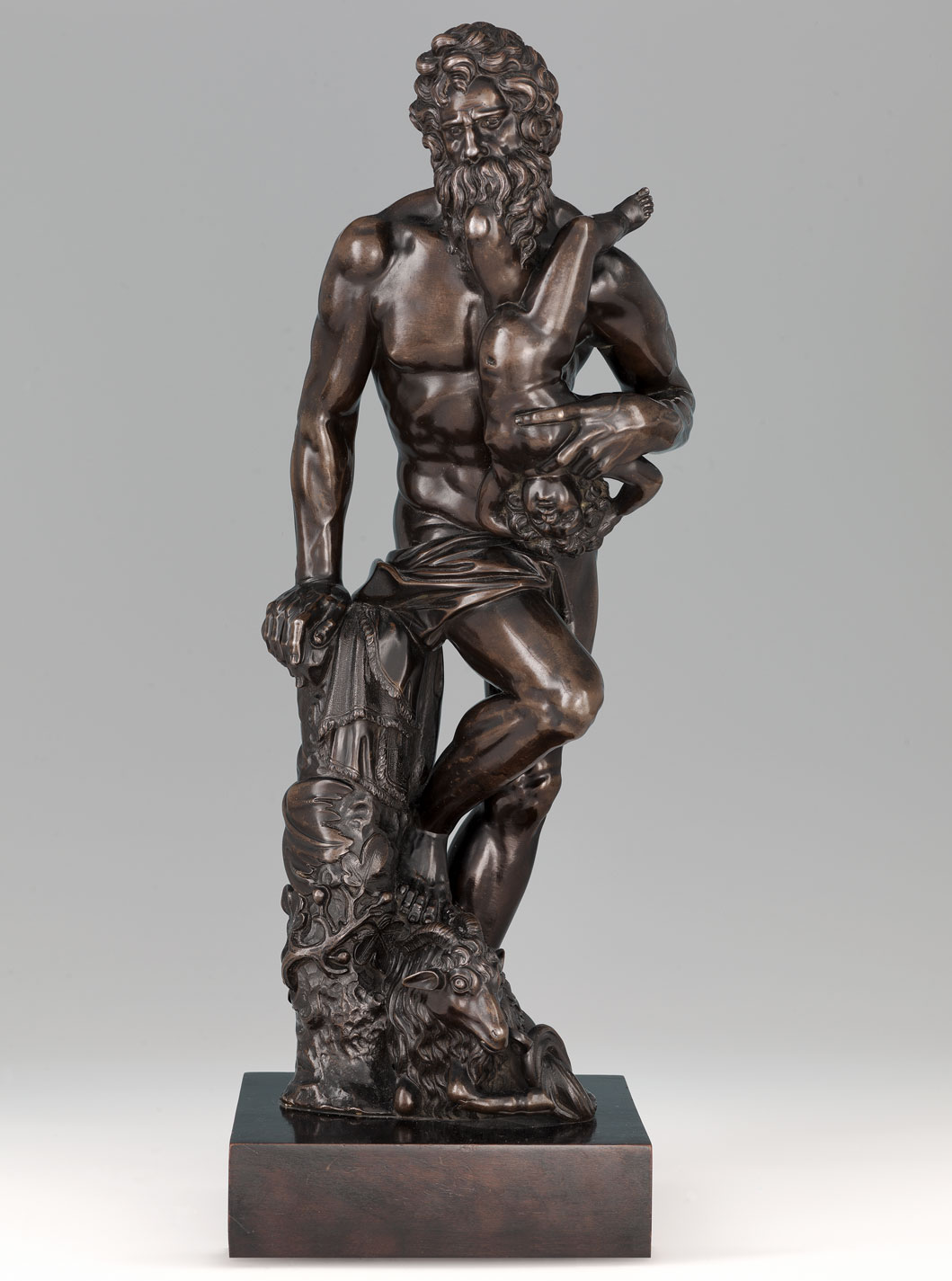 The highly refined and dynamic bronze offered here is one of a very small number of casts that have been connected to the French sculptor and disciple of Giambologna, Pietro Francavilla or, as he was known in his native France, Pierre Francqueville. Three other variant examples of the composition are known: Robert H. Smith Collection, Washington, (sold Christie's, London, 5 July, 2000, lot 63), the Victorian and Albert Museum, London, and the Russell B. Aitken Collection (sold Christie's, New York, 25 November, 2003, lot 79).

Born in Cambrai of a noble family in 1546, Francavilla was discouraged from becoming a sculptor by his father, who considered it to be an inappropriate career for his son. Eventually overcoming his father's objections, Francavilla travelled to Paris and then Innsbruck, where he is thought to have worked on the tomb of the Holy Roman Emperor Maximilian I in the Hofkirche. The path of Francavilla's career was really determined, however, when he was given a letter of introduction to the Florentine sculptor Giambologna by Archduke Ferdinand of Austria. Francavilla travelled to Italy around the year 1572 and would eventually become one of Giambologna's most important assistants, as well as a successful independent sculptor.

The present bronze group is characteristic of several documented works from Francavilla's oeuvre, although there are no contemporary references to confirm the attribution. The pose is ultimately derived from a composition attributed to Francavilla's master, Giambologna, the so-called Apollino. That bronze, an example of which is in the Bargello, has long been considered to be a pre-cursor for the much larger Apollo which was designed for the Studiolo of Francesco I de' Medici, and installed in 1576 (Edinburgh, loc. cit.). That the pose of the Saturn relates so closely to Giambologna's bronze is not surprising; as Charles Avery notes, the entire Renaissance workshop system was based upon the premise that a pupil imitated the style of his master as closely as possible (Avery, op. cit., p. 225). In its proportions and facture, however, the bronze group of Saturn is far removed from the Apollino, which has all the hallmarks of a bozzetto cast into bronze. A more relevant comparison is with Francavilla's Four Slaves, executed to go around the base of the equestrian statue of King Henri IV on the Pont Neuf, Paris.

The parallels between these slaves and the present figure of Saturn are compelling. Both exhibit the same exaggerated contrapposto poses, the luxuriantly rendered hair and the somewhat stylised muscularity. Significantly, when the Smith Saturn was listed in the French Royal Inventory of 1707, it was one of the few entries that actually gave the name of the artist, where it was described as 'une figure de Saturne de Francville'. The attribution of the Smith version to Francavilla is further strengthened by comparison with a signed and dated marble of Janus, executed in 1585 for Luca Grimaldi at Genoa (illustrated in Francqueville, op. cit., pl. VIII), which employs the identical motif of the capricorn figure and overturned urn.

A precise dating for the present bronze is still difficult to determine, despite the recent research on this group. Stylistically, Penny argues that the original composition may have been created in around 1585 as a model for an unexecuted marble representing Winter, and that it was cast in bronze at a later date (Radcliffe and Penny, op. cit., p. 152). In fact, Francavilla was known principally as a marble carver in his youth, and it is only from 1601 that there is any record of his work being cast in bronze.

It has been suggested (Wenley, op. cit., pp. 8 and 12, note 88) that neither the Smith Saturn nor the example in the Victoria and Albert Museum exhibit a typical Florentine facture, and that they may be French bronzes of the later seventeenth century. A French origin is, of course, entirely consistent if one bears in mind that Francavilla lived and worked in Paris from 1604 until his death in 1615. Like the Henri IV slaves, it is possible that the Smith Saturn was cast after Francavilla's death. Indeed, it is known that Bordoni, who cast the slaves in 1618, succeeded to Francavilla's lodgings in the Tuileries. If the model remained in these lodgings, it could easily have been cast by Bordoni at any time up to his own death in 1654.

The facture of the Truesdell Saturn suggests that it falls into this same, slightly later, category. Although altered in details such as the position of the child's limbs, it displays the same warm brown patina and careful chiselling as the Smith example, and is superior to the example in the Victoria and Albert Museum. With its exotic royal provenance, the present bronze closely parallels the Robert Smith example, which has been bequeathed to the National Gallery of Art, in Washington. 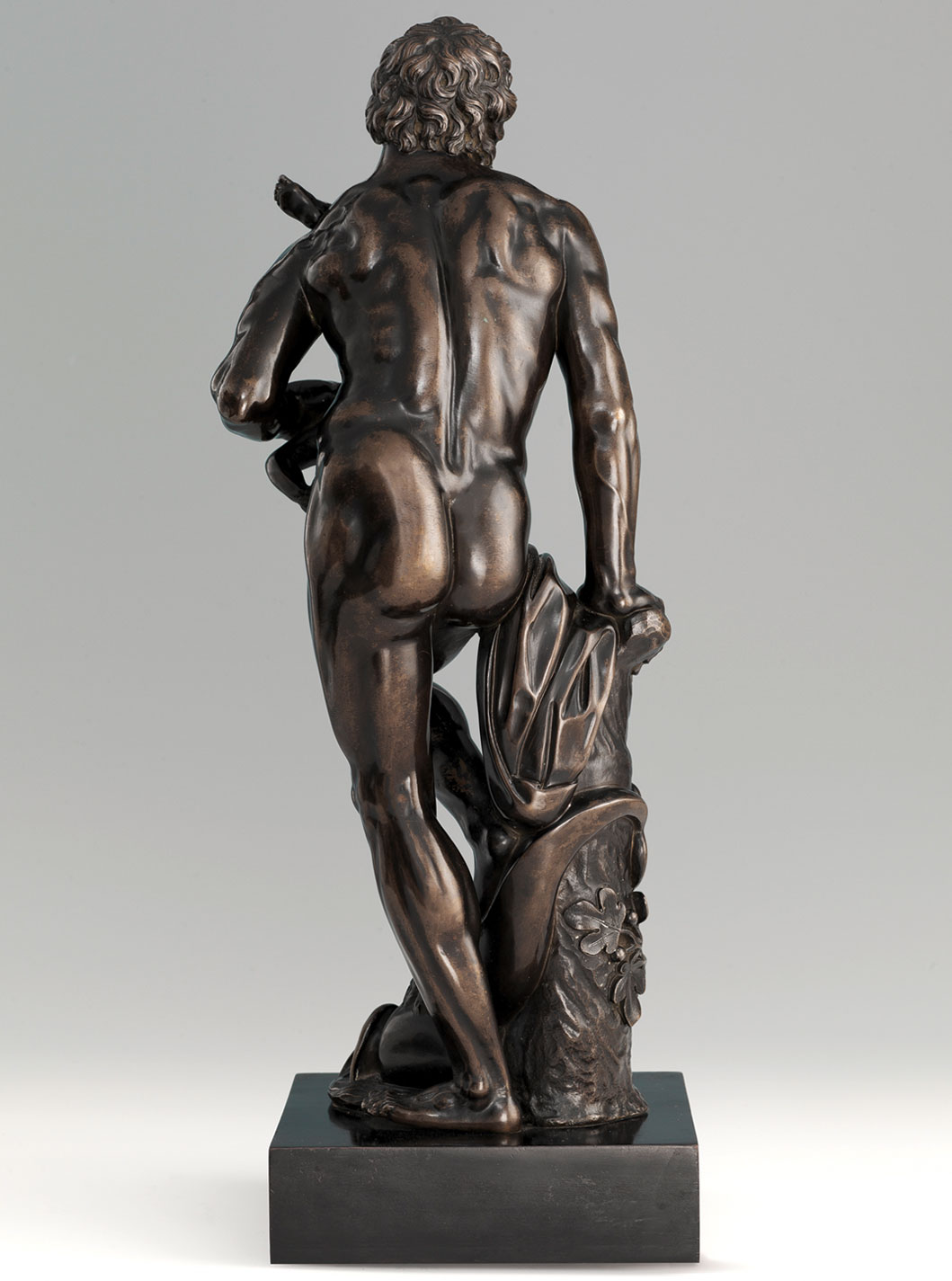 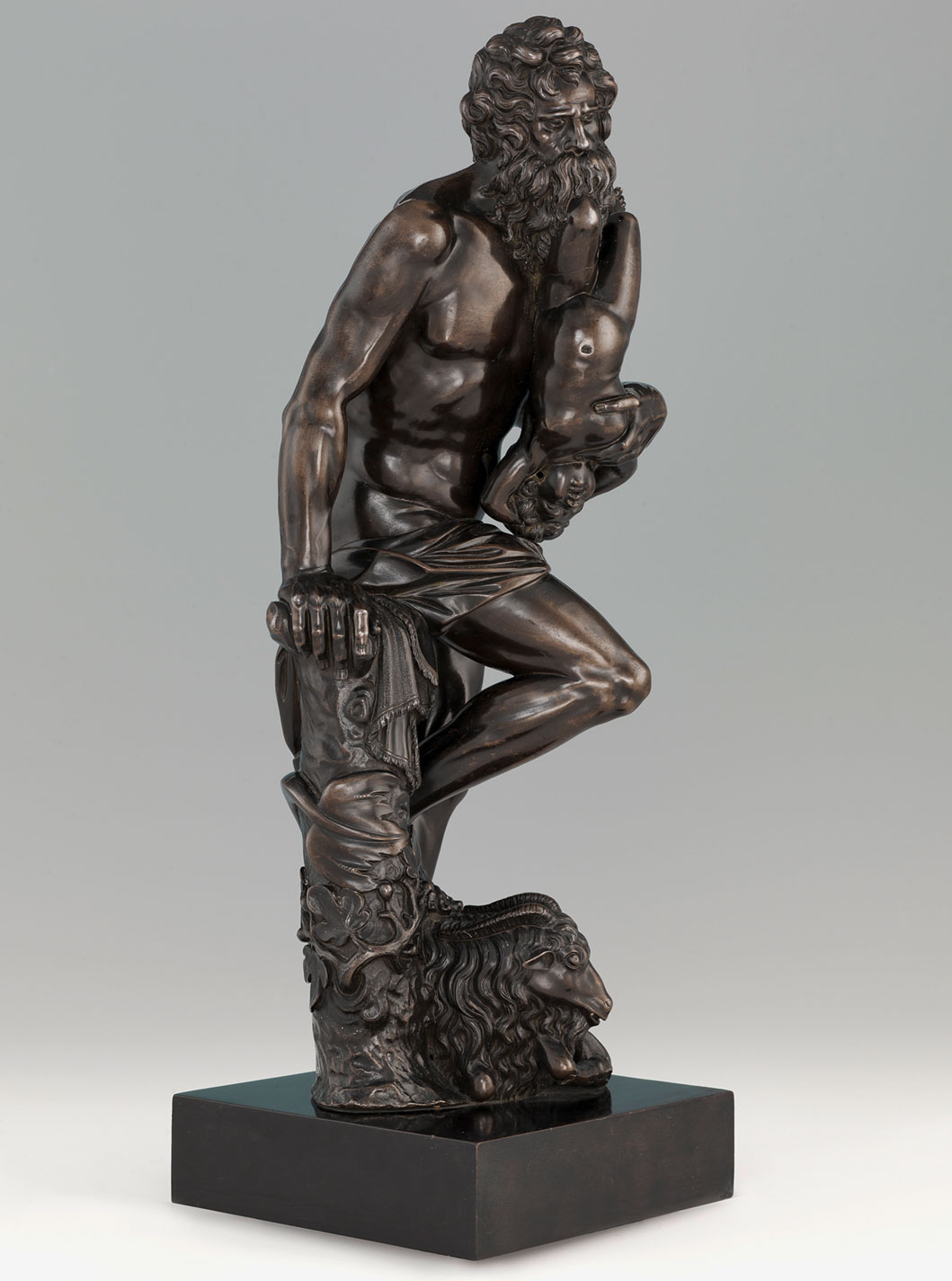 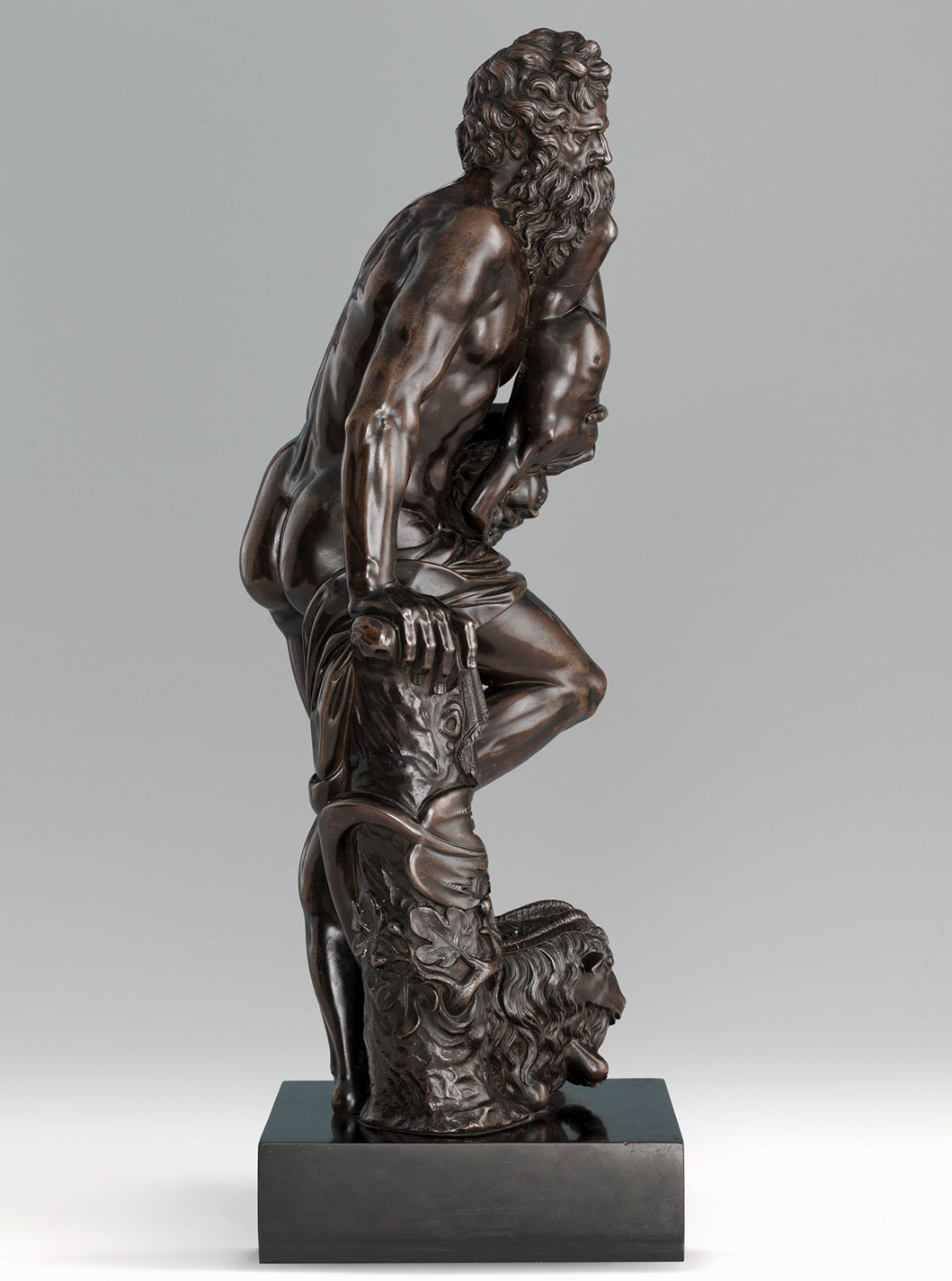 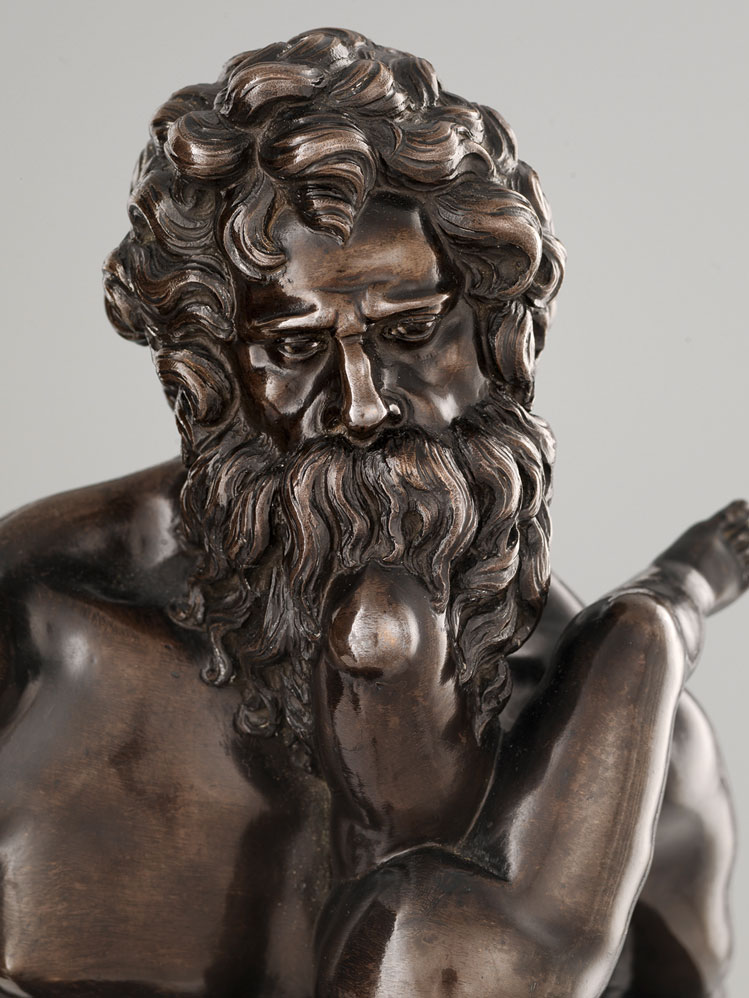