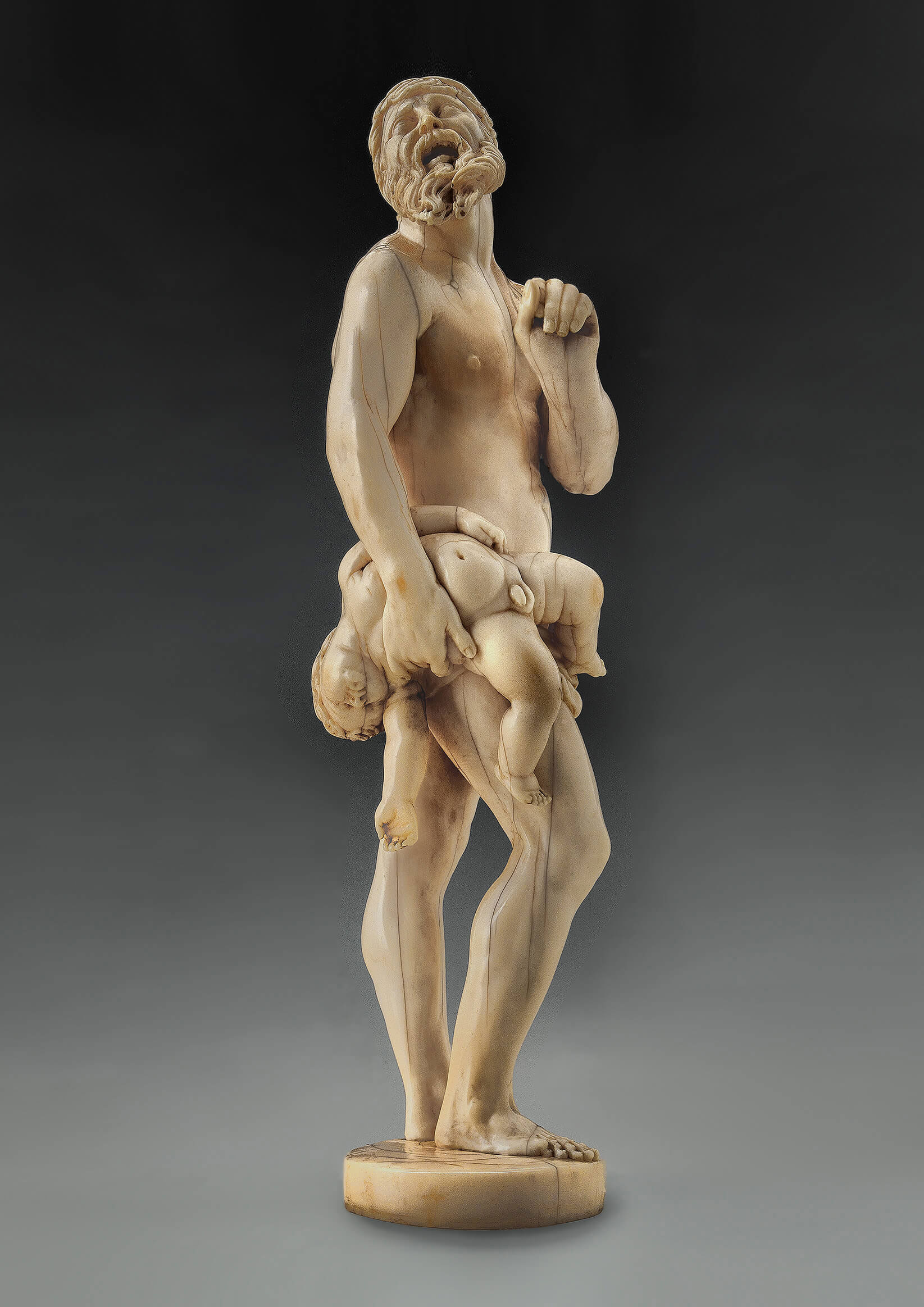 Following the seminal survey of Leonard Kern’s work in Schwäbisch Hall in 1988, Christian Theuerkauff revealed the present ivory as an important new addition to the oeuvre of the prominent German sculptor and ivory carver. According to the article that summarises his comments on the 1988 catalogue (op. cit.), Theuerkauff was notified of the Saturn's existence by its owner, Professor Michael Jaffé, then the Director of the Fitzwilliam Museum, Cambridge.

Theuerkauff’s convincing attribution of the Saturn to Leonhard Kern relies on its close stylistic correspondence to a group of statuettes said to have been produced shortly after Kern’s return from Rome in the 1620s, most of which are kept in the Kunsthistorisches Museum in Vienna. The upturned gaze and protruding forked beard, anguished expression, turned upper body and forward stride are near-identical to Kern’s Anacreon dated to circa 1625-1630 (inv. no. 4558). Kern repeated the formula to a lesser extent in his Moses (inv. no. 4545), the Saint Jerome without a lion illustrated by Rößler (op.cit., p. 138), versions of Abraham in the Victoria and Albert Museum (inv. no. A1-1953) and in a private collection illustrated by Theuerkauff (op. cit., fig. 6), and finally in the so-called Massacre of the Innocents, which was sold at Christie’s Paris on 17 November 2011 (lot 154).
Significantly, the present composition exists in a much-discussed bronze version in the Kunsthistorisches Museum in Vienna (inv. no. 5897). As with many of the bronzes associated with the Kern workshop, the relationship between the present ivory with the bronze version is unclear. However, Theuerkauff suggests that the less sharply rendered details and the smaller size (26.2 centimeter) of the bronze could indicate that it was cast after the ivory (op. cit., pp. 39-40), which would make the present statuette its prototype.

The subject of the ivory has been identified as Saturn (or Chronos in Greek mythology). According to Hesiod’s account, Saturn devoured his children to protect himself from being overthrown by them. This tyranny turned his parents and sister against him, who allowed his son Zeus to escape from his grasp, triggering the devastating war that would bring chaos to the world and result in Saturn's demise. While the subject was depicted in painting, notably by Kern’s contemporary Peter Paul Rubens, there seem to be few sculptural representations of the myth.

Saturn is shown holding a lifeless infant in his right hand, while his left probably held the body part of another to his open mouth. The compellingly gruesome subject-matter must have been of significance to Leonard Kern and his patrons. Themes such as sacrifice, youth and old age, avarice, and the atrocities of war are regularly evoked by Kern’s Kunstkammer statuettes, confronting the viewer with problematic moral paradigms. Perhaps most closely related to Saturn is a statuette interpreted as the Massacre of the Innocents (Christie’s, see above), which shows a bearded male nude dragging the corpse of a child across the floor by its ankle. Cannibalism reappears in Kern’s oeuvre in a mysterious statuette of a seated female nude chewing on a human leg, variously identified as either Gaea (Saturn’s mother) or a personification of avarice, which exists in four versions (see Siebenmorgen 1988, op. cit., nos. 79 to 82). In addition, Kern carved at least five statuettes of different moments in the story of Abraham sacrificing Isaac. According to Hennze’s essay on this group, the sculptor’s preoccupation with such themes reflects an attitude prevalent in Germany during the Thirty Years' War, which anticipates terrible disasters but expects eventual salvation through God (op. cit., p. 29). The effect of this powerful ivory carving upon the contemporary viewer may have been one of catharsis. 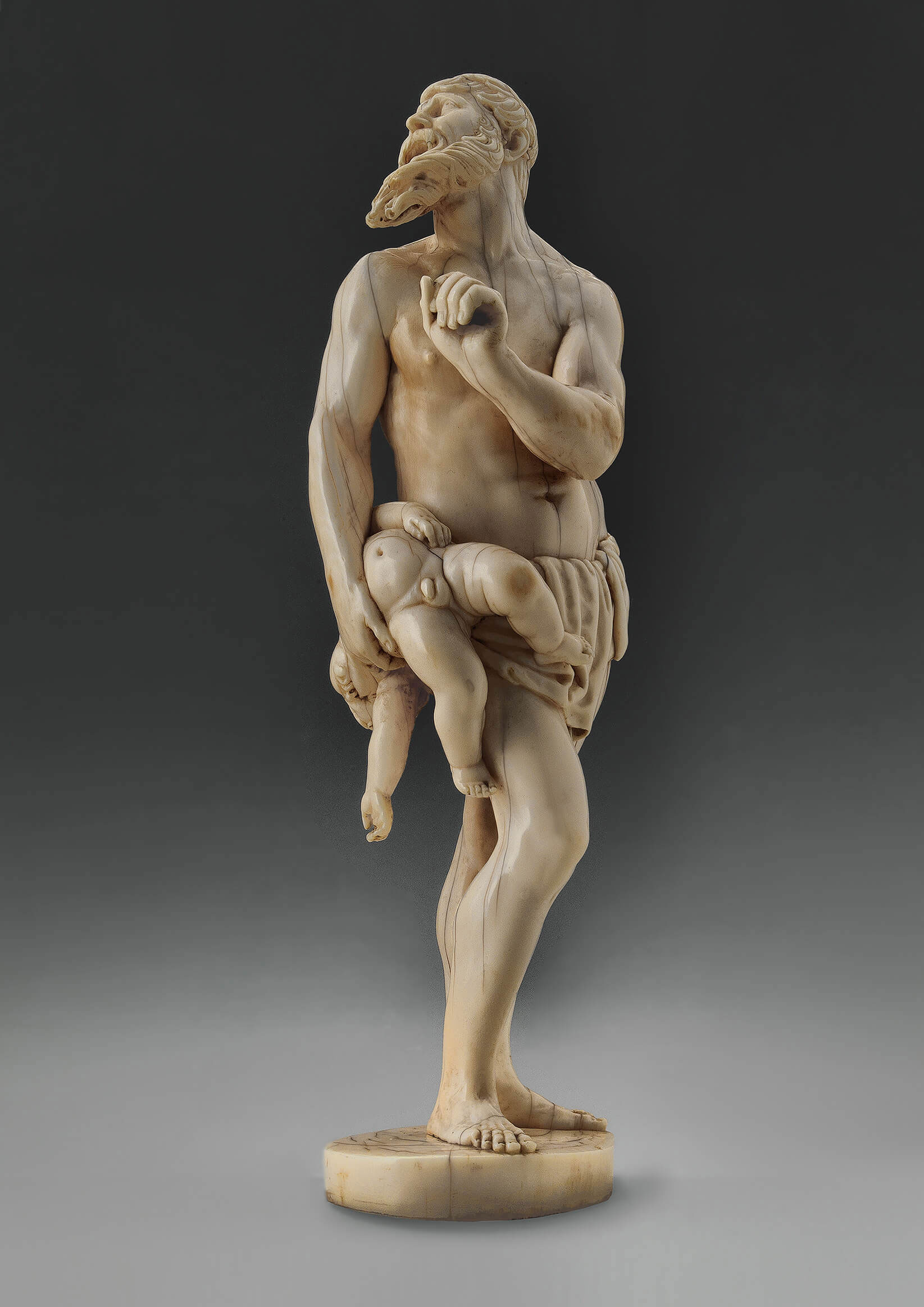 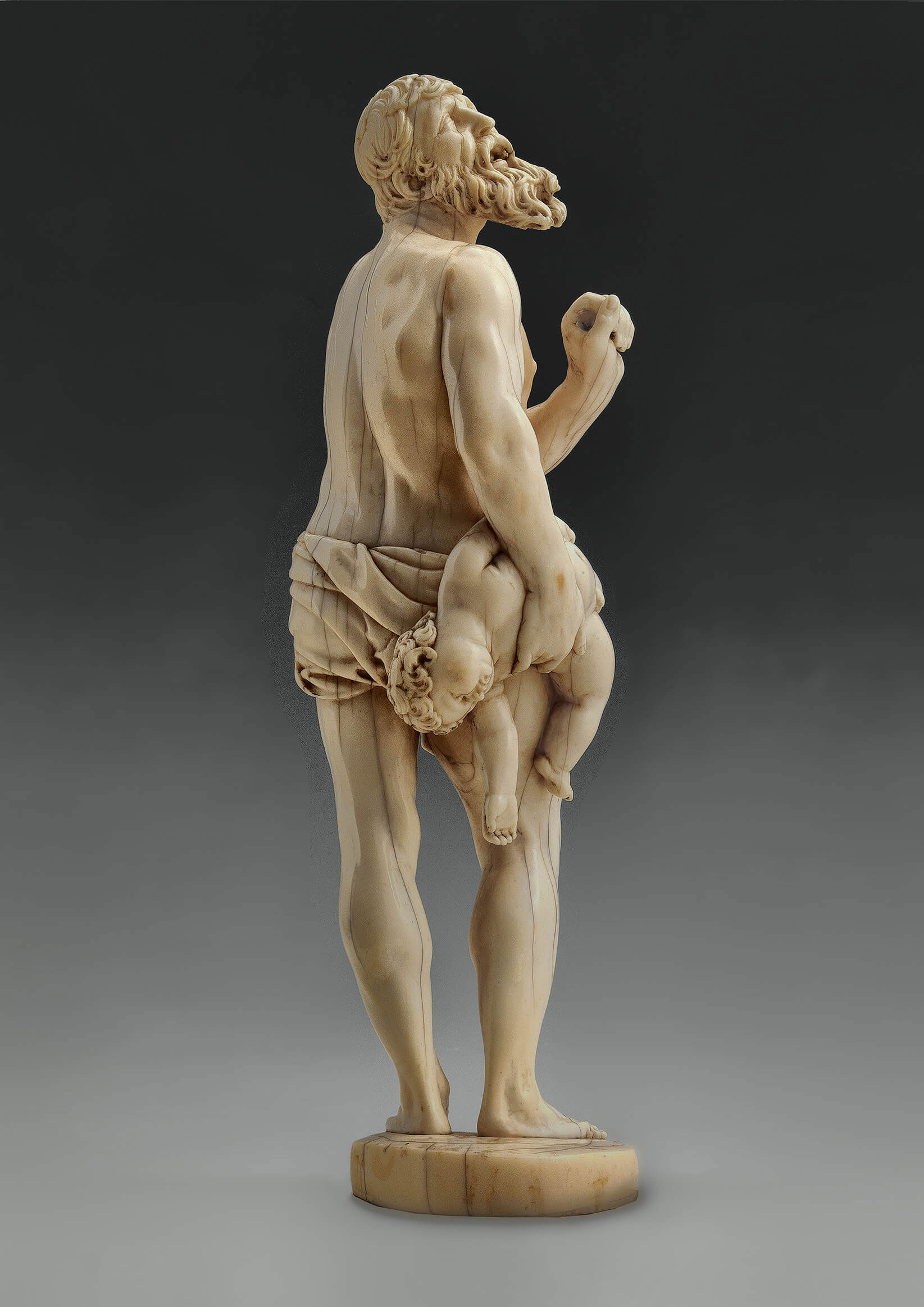 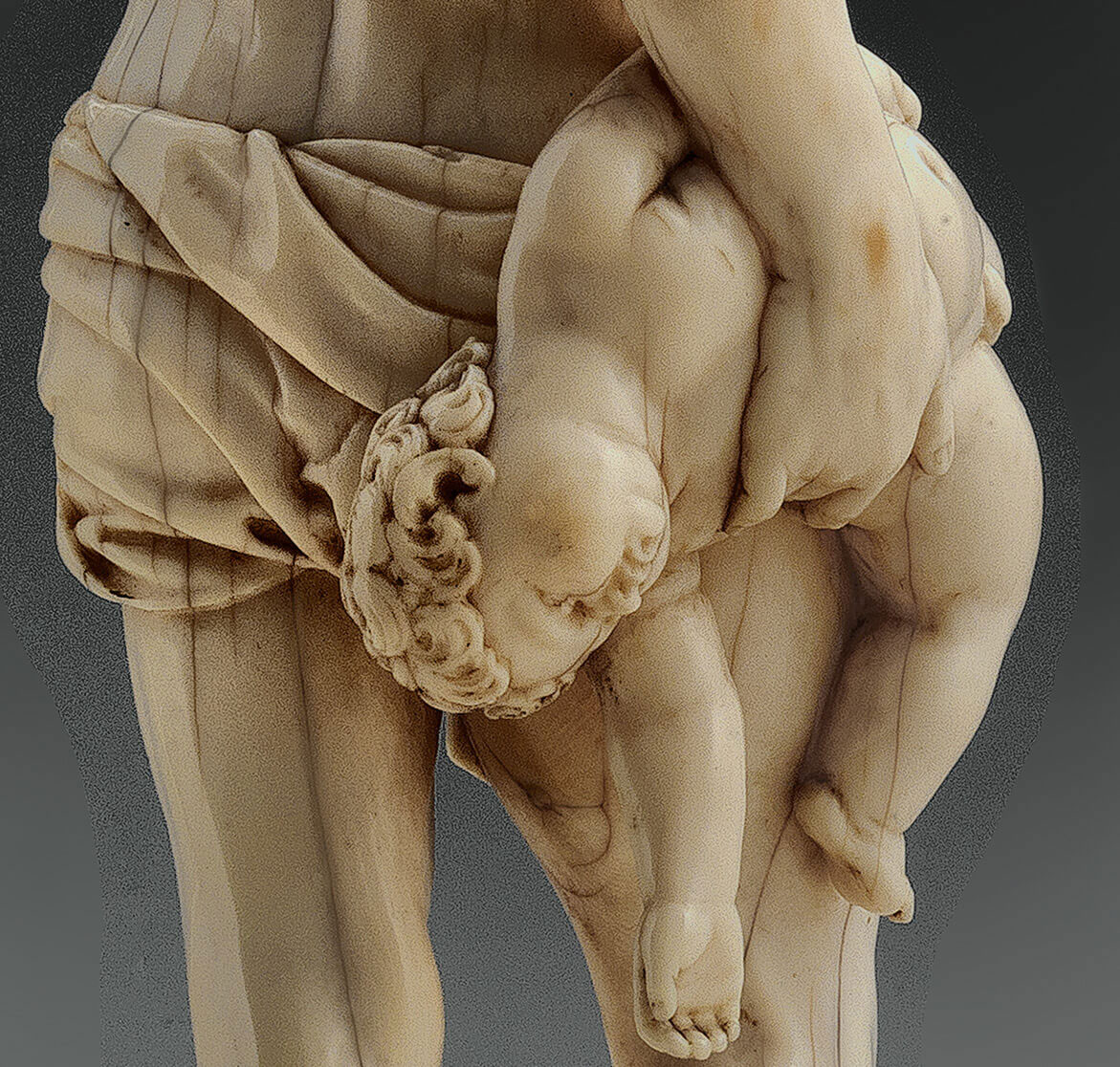 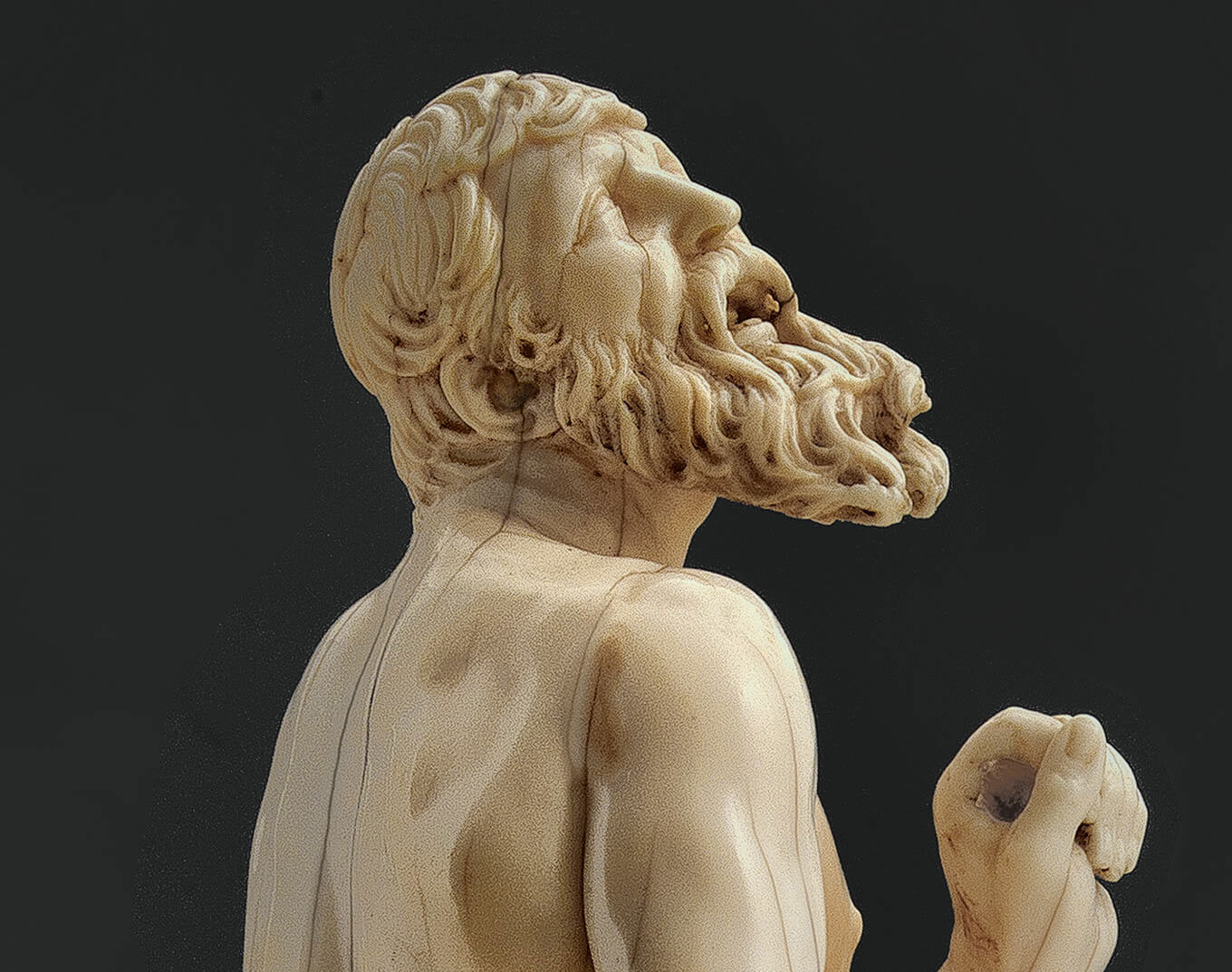