Putto figure of a girl

Wood; Statuette and base are carved from a single piece of wood. 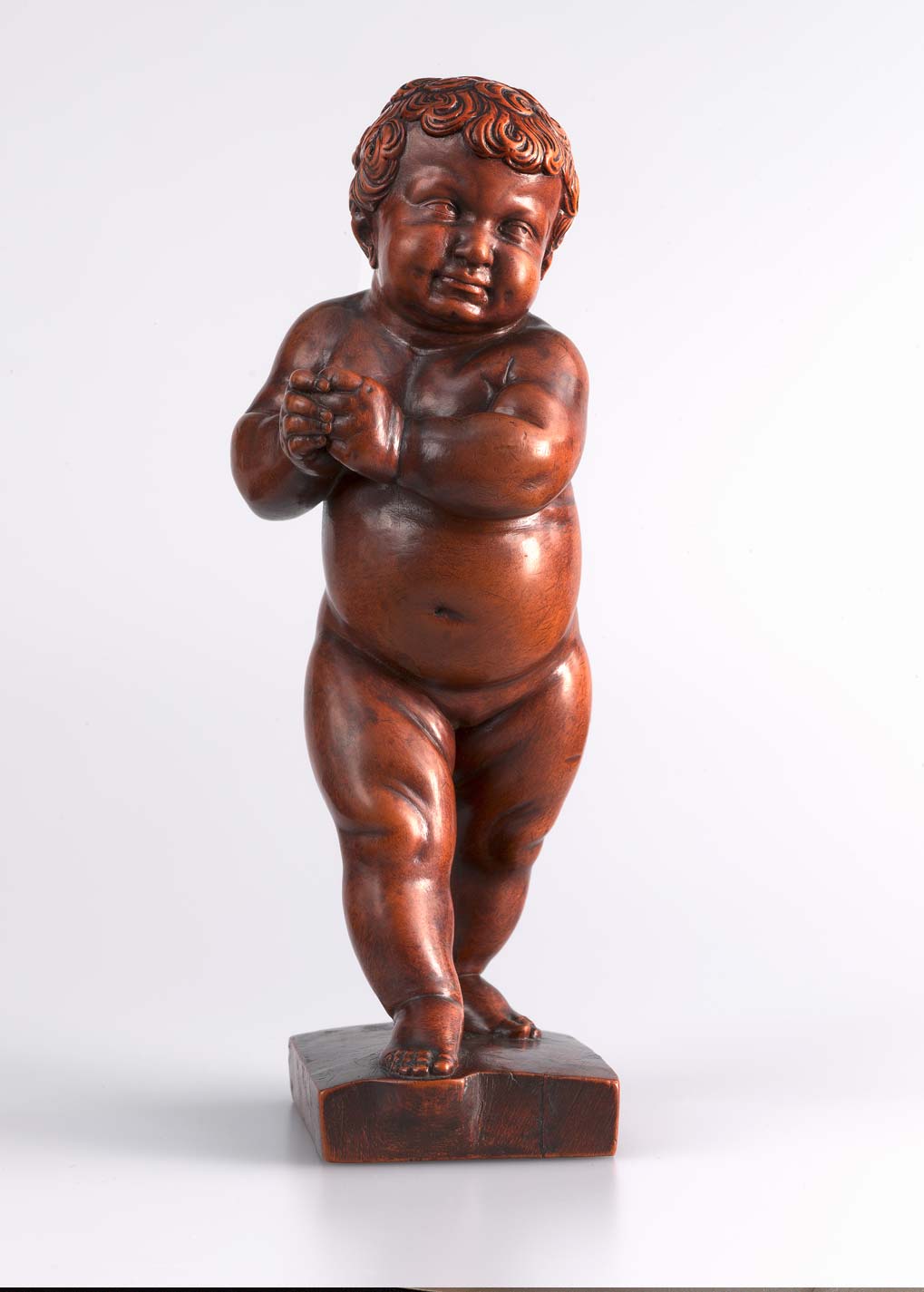 The beginnings and early flourishing of the "putto world" date back to images in ancient Greece and Rome. A second heyday of this type of sculpture arose in the Renaissance and Baroque period, spreading from Italy to the countries north of the Alps in the 16th and 17th centuries.

For Leonhard Kern, a born sculptor, channelling influences was the fruitful outcome of his stay in Italy (1609 - 1613), which was subsequently to permeate his entire oeuvre.

For Leonhard Kern as pater familias, it was his own family - his wife and his children (11 boys, 6 girls) - who very probably posed as models. Quite aside from that, it is statuettes of women and putti of boys that predominate in his oeuvre. In purely physiognomic terms, Leonhard Kern's putti of boys and girls do not differ essentially from each other. However, two facial types arose, namely a round-faced and a long-faced one, as also reflected in the shape of the head (rounded skull or elongate skull).

This putto of a girl is easily attributed to the oeuvre of Leonhard Kern: The putto figure stands on a square base plate. The right (playing) leg is forward, the left (standing) leg is behind. Both feet are placed flat on the base plate (standing pose). The legs are so positioned that they are open to the right. Both arms are angled to lie across the chest. The hands are folded in an original manner and are shifted to the left onto the side of the playing leg. The head, on a short baby-like neck, is turned and inclined slightly to the right. The hair consists of coiled curly locks lying flat against the head like a cap.

The only two wrinkles on the forehead begin at the bridge of the nose and extend from there in arcs. A similar type of wrinkles on the forehead are found on the apprentice sculptor (Museum Braunschweig), but those are the result of hard stonework. The above description indicated clearly that this statuette of a girl is shown in contraposto. However, this is only one criterion for determining whether it is the work of a master or someone in his workshop.

Another criterion is the comparison with older, unsigned statuettes in public ownership considered to originate without doubt from Leonhard Kern; these include: 1. the two boys "from old Kern to hall" (Leonhard Kern is meant), 2. the girl with a potty (Schwäbisch Hall), 3. the piggy-back carrier (Weimar, Goethe's collection of art), 4. a boy stepping out (Hamburg) and 5. an almost identical piece (Frankfurt, Liebieghaus).

Another aspect concerns the motif that is represented, and its symbolic meaning. Such analysis is aided perhaps by 6. a sandstone putto (monumental sculpture) by Artus Quellinus the Elder (Gabriels, Quellinus Taf. 15). The male (?) putto (now in the Eremitage Museum in St. Petersburg) is clothed merely in drapes, and also adopts the posture known from this putto of a girl. His mouth is wide open, both hands are raised and folded in the same manner as those of the girl putto but is turned (beseechingly?) upwards. That particular figure is another of the round-faced type and is shown without attributes.

7. A second find relates to the monumental sepulchre of one of the Counts von Hohenlohe (died 1644). Two winged putti of angels were placed in the sepulchre. They embody "Justitia" (Justice, the male putto) and "Patientia" (Patience, bearing the inevitable steadfastly and with composure). Their attributes, notably, are the lamb, and the hammer and anvil. A third attribute is the gesture of the "folded hands", as also shown in 18th-century pictorial images of Patientia.

The iconographic and figurative programme behind the gravestone referred to by comparison is of such high quality that, of all the regional artists, it could only be Leonhard Kern who made it. By comparison with other datable works by the artist this putto figure of a girl by Leonhard Kern has to be dated to the period around 1635/40. 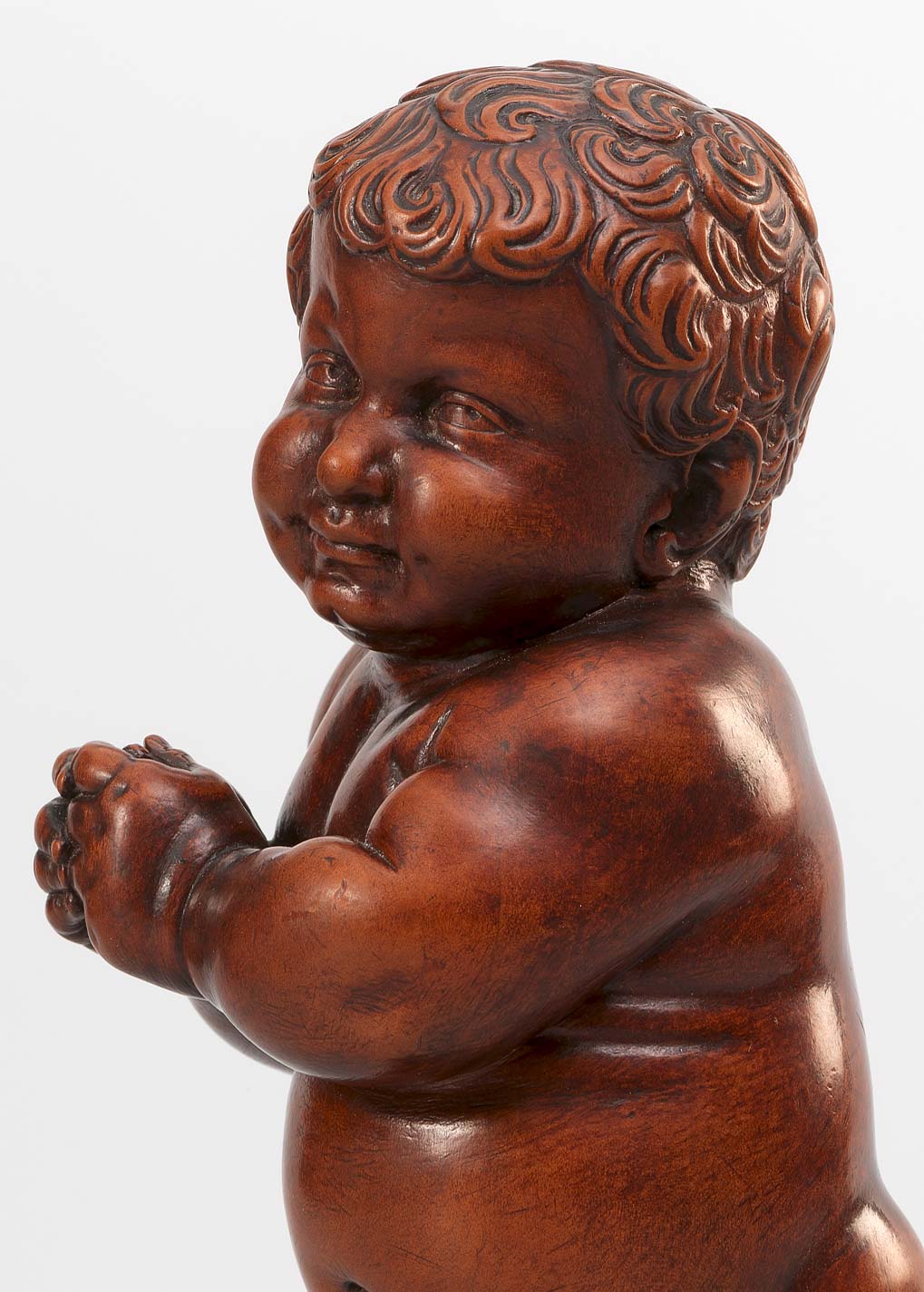 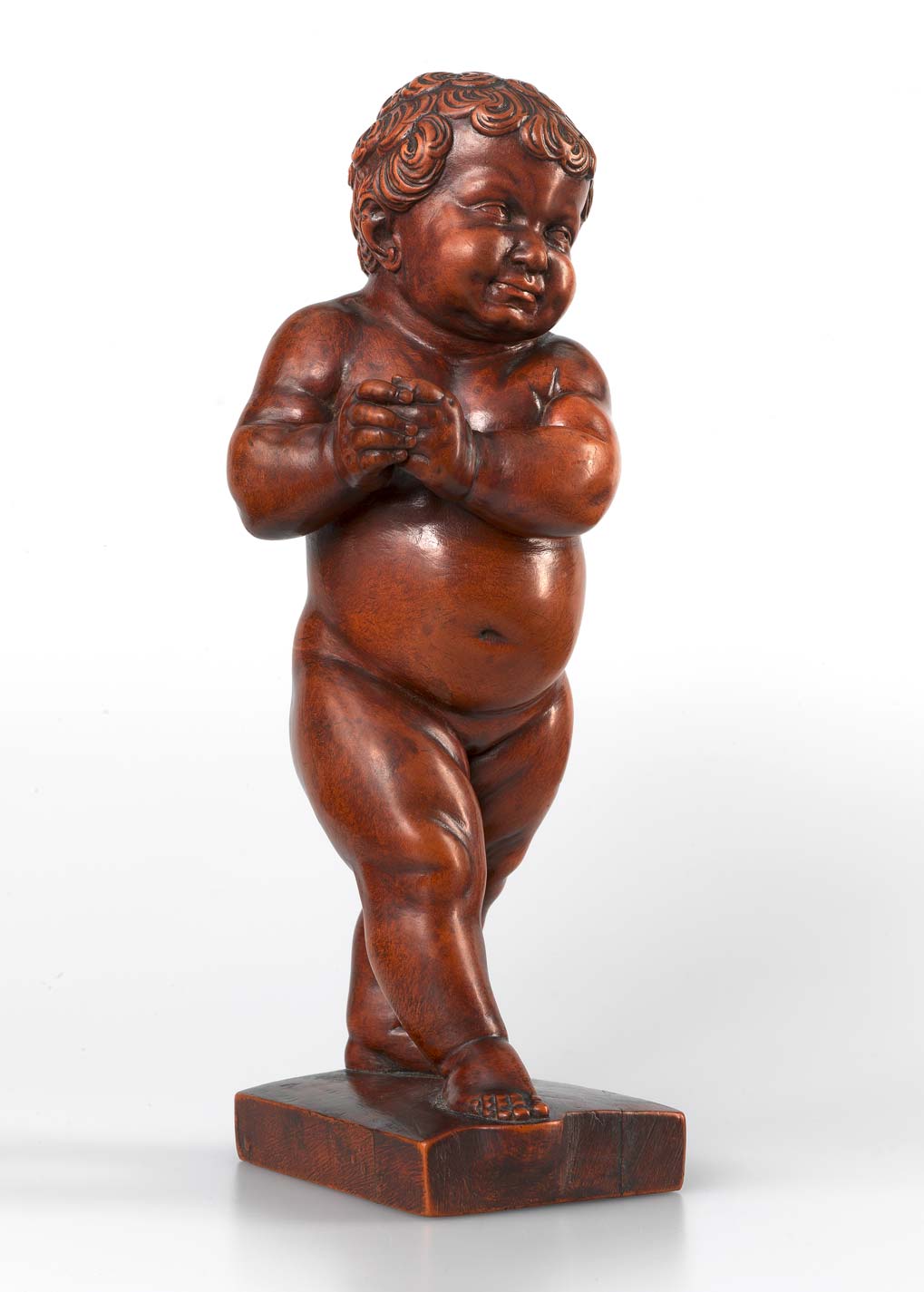 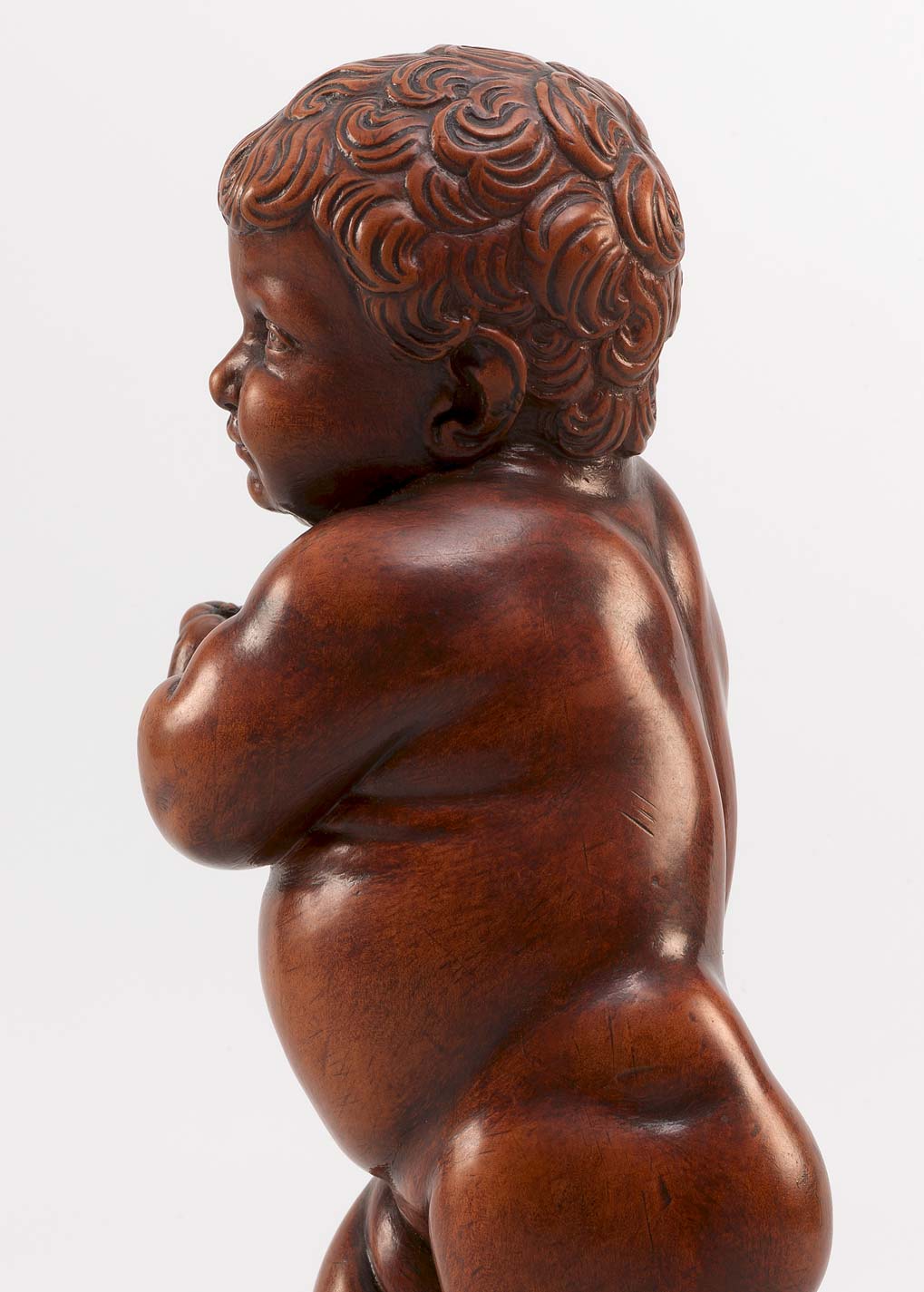 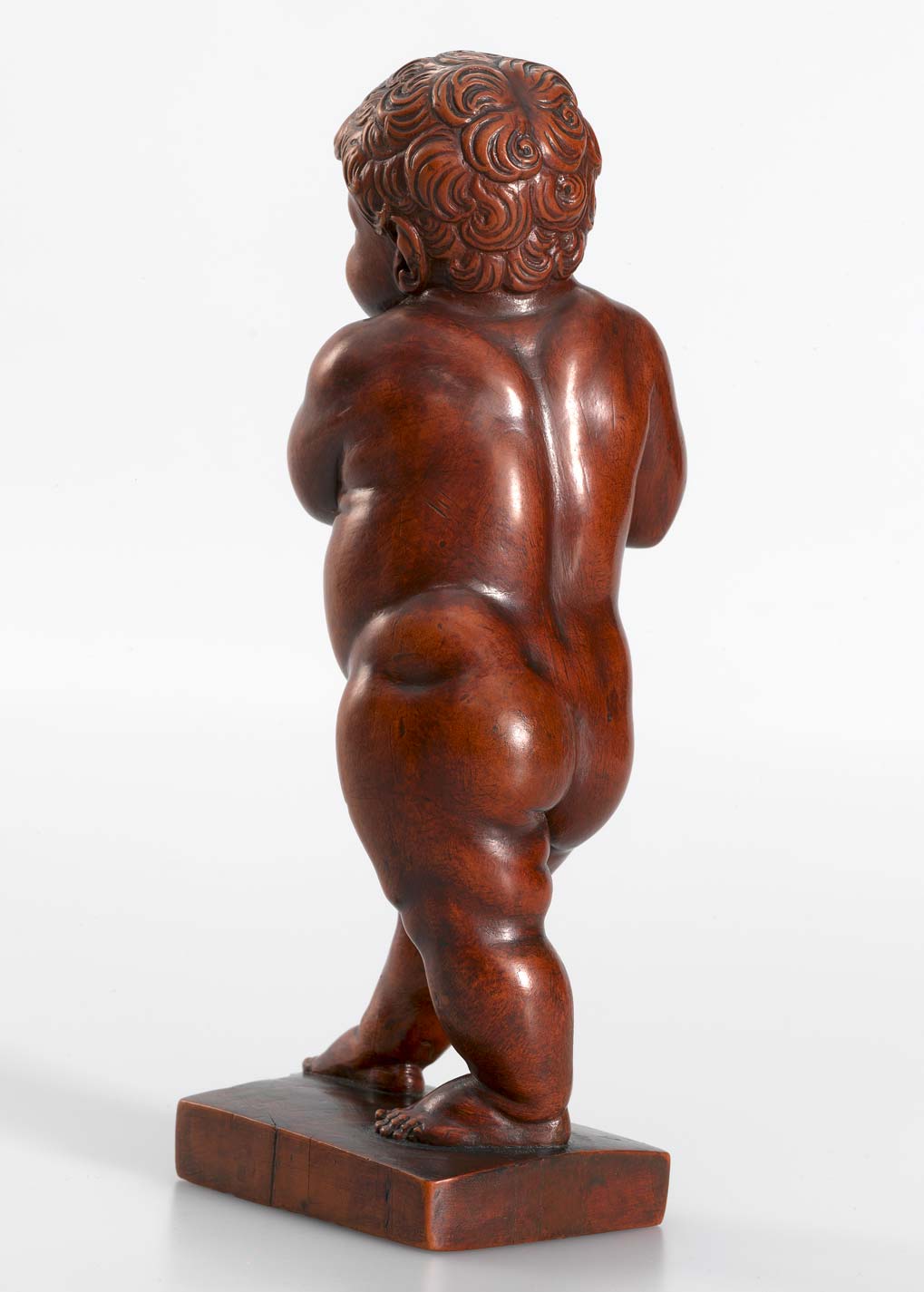